How the Oscars ended up pleasing nobody

Tragedy rarely suits the Oscars. Lavish self-celebration is tough to pull off in wartime. Set against the devastation of Ukraine, the 94th Academy Awards are already an uneasy prospect. A wince arises at the thought of the platitudes ahead on the red carpet of Hollywood’s Dolby Theatre, of blue-and-yellow ribbons pinned to Dior. Might it have been wiser to dial it down? To lessen the chance of howlingly misreading the room?

Unfortunately, the Oscars already tried that — and no one was happy. Last April, amid Covid, the Academy scaled back to casual minimalism. Brad Pitt, Glenn Close and the rest were scattered around the Art Deco waiting room of Los Angeles Union Station. The result had the air of tuxedoed preppers sitting out a zombie apocalypse. US television ratings were abysmal, the press and social media scathing. Where, people demanded, was the fun?

Too escapist. Not escapist enough. Such is the ongoing crisis for the Oscars, a once fondly regarded institution that now seems to aggravate audiences whatever it does. A year on, it is clear that the pandemic did not bring us together. And the Academy Awards may be two things at once: a perfect reflection of a bitterly divided world and a rare exception to it. In 2022, nobody can stand the Oscars.

That unpopularity has been a long time in the making. For most of the past decade, the awards have been mired in anger around diversity. The hashtag #OscarsSoWhite, created by activist April Reign in 2015, has seldom felt redundant since. Dismay has also surrounded the recognition of women. (As recently as 2020, the Best Director shortlist was all-male. “Congratulations to those men,” actress Issa Rae deadpanned as she announced it.) Without doubting the good faith in which the Academy has remodelled itself, its frantic reforms have also been carried out in the hope that each new Oscar year will finally stop being a Groundhog Day of cataclysmic PR. 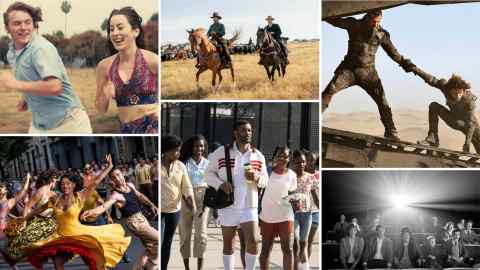 In that respect, the Academy might see this year as a relative success, should they ignore both the focusing of minds on Ukraine and a general weary disengagement. It would take the same strength of will to claim that this year’s nominees are evidence of diversity realised. Jane Campion is now frontrunner to win Best Director for her gothic Western The Power of the Dog; she is also the only woman among five nominees. Equally, just one of the 10 contenders for Best Picture was made by a black director (Reinaldo Marcus Green’s King Richard, a biopic of Venus and Serena Williams’ father). To date, a black film-maker has never won Best Director. Academy members would argue that they can only reward the films the industry makes. True. So is the fact that they are the film industry.

And yet it is hard to discuss this without feeling that you are being eye-rolled at. For as long as the Oscars have been wrestling with diversity, bad-tempered counter-complaints have come from those on the right who are less troubled that Hollywood’s prestige films are largely made by and about white men. For that constituency, the Oscars’ strenuous mea culpas have made them the gold standard of idiot liberalism. Again, the Academy faces spleen from all directions: for people to whom diversity matters, the Oscars’ problems are unfixed; to those enraged by the very subject, the awards have become a piñata. Ever helpful, the Daily Mail summarised the shot-by-both-sides nature of it with the headline: “Woke Oscars so white again.”

It shouldn’t be a surprise that the rancour — caught up with an all-pervasive culture war — has spilled over to the actual movies. The clearest example is The Power of the Dog. At the end of February, veteran actor Sam Elliott lamented what he saw as the film’s inauthentic account of the early-20th-century West. “A piece of shit,” was his verdict. In response, Campion called him a “bit of a bitch”. Soon afterwards, the director also had to apologise when an ill-judged remark about Venus and Serena Williams seemed to diminish the obstacles they had overcome. The bunfights have been jarring. Strict politesse usually rules Hollywood in the run-up to the Oscars. But the sourness has extended beyond the awards. Among audiences too, The Power of the Dog is the most disliked Oscar favourite in years.

Again, the Academy might spin that as good news. Another frequent bugbear about the modern Oscars is that leading contenders are now little seen. Not so the Netflix release of The Power of the Dog. (A strong performer for the company, it was briefly the most watched film on the entire platform.) Yet the mainstream has proved a mixed blessing for a film of art-house tone and deliberate pacing. Exposed to a wider crowd than it might typically attract, it has left much of the audience cold, uncharmed by Campion’s burnished craft.

We also live in times when taste can be politically loaded. While many sceptics may simply have been bored by the film, it would be naive not to see some of the ill will as being connected to the culture war. In sulphurous Montana rancher Phil Burbank, played by Benedict Cumberbatch, the movie presents a voodoo doll of what is now called toxic masculinity. A fan of conservative media personality Jordan Peterson, for instance, might struggle not to take things personally. (It should be noted that the portrait of gay characters has also been accused of homophobia; the film really has a knack for alienating a crowd.)

But for the Oscar-watcher seeking an antidote to liberalism, an alternative is there to root for. Second only to Campion’s film in nominations is another landscape-heavy vision of a teenage boy’s rite of passage: Dune. Modern discord is never far away. The politics of Frank Herbert’s sci-fi saga were debated long before director Denis Villeneuve reached planet Arrakis. But a constant fuel for Herbert’s work was his libertarianism, a loathing of government that would neatly fit our current hostilities. Loyal followers may sense an agenda in the film’s relegation to mere favourite for the technical categories. While Dune is, of course, widely popular as pure epic storytelling, in a culture war it is still far from neutral territory.

And then there is Don’t Look Up. A hotter potato than even The Power of the Dog and another Best Picture nominee, director Adam McKay’s starry, despairing farce caused mayhem from the start. The loudest dispute came between critics (sniffy) and the Netflix audience (huge, enthused). It brilliantly evoked the chaotic din McKay was satirising before anyone even got to the politics. In fact, people couldn’t even agree what the politics were, many viewers refusing to accept that the world-ending comet at the heart of the story was meant as a metaphor for climate change. (McKay later spelt out that it was.)

But beyond this year’s slapstick may lie a deeper Oscars story with long-term consequences. Nostalgia is tricky when an institution is accused of excluding so many for so long. But the very passion of a movement such as #OscarsSoWhite speaks to how much the awards have meant. For almost a century, they have been a beloved glacé cherry set on top of a culturally dominant double act: cinema and the feature film.

Now even those superpowers are weakened in a world divided. With enough budget, it is possible to mimic physical cinema at home. Money and technology allow the film lover to exit the commons. Individualism reigns. The collective space of cinema loses further numbers.

And yet watching films at all now means picking a side. In the politically inflamed, ever more popular arena of online gaming, trollish rightwingers write off movies as tainted by liberal values. More corrosive to the future of film, however, is the libertarian appeal of gaming: you have the controls. Movies can only seem passive in comparison, every detail mediated through a director. In 2022, Phil Burbank would have a home cinema. Frank Herbert would game.

Still, for the Oscars, the real coming comet may not be politics but irrelevance, not anger but bafflement. While culture wars can seem to divide us into two vast tribes, actual culture has become a digital melee of numberless content makers, micro-niche markets and upended hierarchies. (Much has been written about how music on TikTok makes viral sensations of obscure non-hits.) Films and even cinema will survive. What does feel out of time is the ceremonial ranking of creative work, annually judged by anonymous gatekeepers. Anyone becoming aware of the Oscars for the first time this year might squint in confusion. Who are these people? And why do they keep giving themselves statuettes?

The last Oscars are not yet upon us. We remain in the first phase of gradually-then-suddenly. But the world in which events inside the Dolby Theatre mean much at all beyond it is probably on borrowed time. And outside, as ever when bombs are falling, red carpets risk looking all wrong.

The Academy Awards are on Sunday, oscars.org

Warning: MUFG is at high risk of cutting its dividend

Serena Williams and the road ahead for tennis

As the Russia-Ukraine war enters its 171st day, we take a look at the main…

Warning: MUFG is at high risk of cutting its dividend